(1880) The Old Wakopa Cemetery is the resting place of some of the earliest homesteaders of the Turtle Mountain region.

Wakopa, located on the northeastern slope of Turtle Mountain, is now nothing more than a tumble-down house and shed surrounded by cropland. Yet even this sight has left more for the interested historian to contemplate than the site of Old Wakopa two kilometers southwest, now totally obliterated due to farming activities. Yet this invisible site was once a bustling settler community—the first of the many pre-railway villages that were to pop up in the following years. 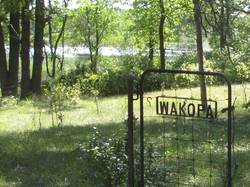 The community began as a trading post. Bernerd B. LaRiviere was a Métis man from Ottawa who began his business career as a fur trader in Minnesota before looking for possibilities in Canada. He was fluent in English, French and seven native languages, though he could not write so much as his own name. On a hunting trip to Turtle Mountain in 1876, he got the idea to set up a store in advance of European settlement. He anticipated that the needs of new settlers would be many when they arrived in the Northwest, and to have a store already established would prove a profitable enterprise for him as a merchant.

Founding the First Stopping Place in the Southwest

Following the Boundary Commission Trail to a spot on the edge of Turtle Mountain, LaRiviere found a place in an elbow of Long River that had been used by Assiniboine as a camping place. He felt it would be an ideal spot for his store. He bought the nearby Turtle Mountain Depot (established by the Boundary Commission Surveyors in 1873 and since then disused) and its remaining supplies and by late spring of 1877 both his house and store were built on the site he had chosen. The buildings were built on either side of the Boundary Commission Trail which became the following settlement's main street. By establishing such a stopping place he became the area's first general store owner and founder of the very first settlement town in the southwest.

The settlement was first called LaRiviere, but it came by a different name very shortly. Bernerd LaRiviere enjoyed a good relationship with a native man who lived nearby. The man called him by the name of Wakopa—meaning “White Haired Father” in the Assiniboine tongue. This name was adopted by the village and came into regular use in 1881.

By the spring of 1880, several settlers had made their way west and contributed to the growth of Wakopa. Matthew and William Harrison and C. W. Williams soon had a grist mill and saw mill in operation. They also built a boarding house and livery barn to accommodate the increasing number of settlers and their horses. Two blacksmith shops were set up, one in town and another four miles to the west. The first church services were held in LaRiviere's home, but later the schoolhouse was used. The school, built in 1882, was the first school in all of the Turtle Mountain-Souris Plains Basin area.

More homesteaders came, bringing with them their dreams of settlement and beginning ventures of their own. One farmer brought a threshing machine that serviced the entire community. A creamery was operated in 1883 by T. A. Sharpe but wasn't a great success because his cattle came down with tuberculosis. Nonetheless, the village as a whole became a busy centre with the addition of a post office, another store and several log and sod houses. Seeing new settlers passing through making their way farther west was a daily occurrence.

Revitalised by the Railroad

The village of Wakopa was an active and successful community for half a dozen years. In 1886 the CPR railroad reached Killarney and Boissevain to the north, and Old Wakopa began to fade. Both mills ceased operation, and one by one buildings were either torn down or moved away. Eventually all that was left of the once-bustling village was a few empty basements.

The village got a breath of fresh energy when the tracks of the Great Northern and Canadian Northern railways were both laid in 1905 and the village sprang up again where the two railways crossed. The only building used from the old village was the schoolhouse which was moved into the new town and used as a home by the butcher, Andrew Jasper and his family. This village lasted until the 1960s when rail service terminated.

Armstrong, L.O. Meet You on the Trail or West Before the Railroad Volume I Southern Manitoba and Turtle Mountain Country. 1880. Winnipeg: Boundary Commission—NWMP Trail Association, 1991.

(1877 – 1886) The first town in the southwest. Bernard B. LaRiviere established a home and store which serviced the first settlers coming west along the Boundary Commission Trail.

Note: Must cross private property to get there. Call ahead to cemetery caretaker: 204-523-8801