The Oldest Highway in the West

Though there is one period of its life that gives the Boundary Commission Trail its name, the history of the trail itself spans centuries, crosses cultural lines and involves a multitude of goals and purposes. Parts of it began as a First Nations travel and trading route, which the fur traders of the 18th Century took advantage of when they began penetrating the interior of the then-called Rupert's Land. Not too long afterwards, the Red River carts of the Métis wore grooves into the prairie sod of the trail in their pursuit of the buffalo as the large animals retreated ever westward and into eventual disappearance. 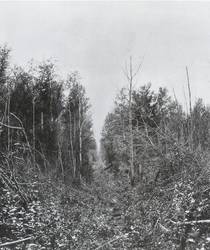 In 1818, Canada and the United States agreed that from Lake of the Woods to the Pacific Ocean the border between the two countries would be drawn along the 49th parallel. The final agreement regarding this decision occurred in 1846, though the border remained unmarked for nearly 30 more years.

Canada purchased Rupert's Land from the Hudson's Bay Company in 1870 after which it was felt that the time had come to mark the border. In September of 1872, two parties set forth from Lake of the Woods, Ontario: Her Majesty's North American Boundary Commission and the United States Northern Boundary Commission. The two parties worked in cooperation from their respective sides of the border. They each had their own astronomer who calculated the location of the 49th parallel and in the event that calculations were different, the mid-point between them was accepted as being correct.

Over the course of the next two summers, the Boundary commissioners worked their way west. A body of mounted Métis scouts led the procession, followed by labourers breaking the trail with the surveyors traveling behind. The trail ran generally close to the border, just far enough north to ensure safety from conflict with the Dakota in America. The Dakota were upset with the Americans for establishing posts on sacred land and for ignoring and breaking treaties. While the British commissioners traveled very lightly armed, the Americans on the other side of the border were accompanied by heavy military escort.

Alongside the survey of the border, topographical surveys were conducted for the six miles directly north of the 49th – the first row of townships. The resources of the land being traversed were recorded and bird species were gathered and documented as well. On their way through Turtle Mountain, the commissioners established Turtle Mountain Depot, a log building that served as a supply centre. Five years later, Bernerd B. LaRiviere purchased the post and moved it a few miles east where it became the beginning of Wakopa.

The Boundary Commissioners finished their survey during the summer of 1874. Near the end of that year the North West Mounted Police used the Boundary Commission Trail – freshly blazed – as their avenue of travel on their trek to “establish law and order in the west” and to prepare the frontier for settlement.

Settlement and Faster Modes of Transportation

And so the Boundary Commission Trail, once familiar with the feet of First Nations moving to and fro and Red River carts pursuing the hunt, became accustomed to the sound of settlers heading west. The first villages in southern Manitoba were established alongside the Trail, flourishing until the railroad came to the area. For centuries the Boundary Commission Trail had served as the highway to the west, transporting goods and people. With the technology provided by the railway came a new era of prairie lifestyle and travel as it proved that it could transport everything and everyone at a much faster rate. Thus overland tracks and trails that offered intimate wafts of wild rose and yarrow fell into disuse. Evidence of the Boundary Commission Trail still exists in places such as Newcomb's Hollow and Sourisford.