It is a common perception that most plains Aboriginal peoples were nomadic wanderers who were largely dependent on what has been described as the “mobile supermarkets of the vast herds of migratory bison.” Though this was true of some First Nations, the Snyder II site south of Melita suggests that agricultural activities in southwest Manitoba did not begin with European settlers.

The Snyder II Archaeological site is on the bank of the Gainsborough Creek just half a kilometer west of its junction with the Souris River. The site was first excavated by curious pioneers in the early 1900s, though few field recordings were made at that time. In 1970, and again in 2006, Archaeologist Leigh Syms made a more thorough excavation of the site, which produced direct evidence of pre-contact native agricultural activities. 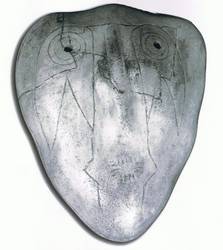 A replica of a shell mask/gorget found at the Snyder II Site.

Syms excavated a bell-shaped storage pit at the site which measured over a metre deep. The lower portion of the pit revealed two distinct hearths with concentrations of fire ash, artifacts, evidence of a sweat lodge, and bison scapulae (shoulder blades). The bison scapulae were a particularly significant find in an agricultural sense because of their use as hoeing implements—evidence that the soil was being worked in the immediate area. The storage pit itself was used to store surplus produce, an indication of a semi-sedentary occupation. The people who worked the land here would either have lived in a permanent village or were around for enough of the year to maintain crops and live off of the storages they made in pits such as this one.

Evidence of a village occupation is scattered over many acres of the neighbouring cultivated field. This field, among others, exhibits depressions on its surface, which Syms speculates is indicative of at least seven other pits. The activities of modern agriculture have wiped out evidence of how many other storage pits there might have been, in addition to whatever gardens or fields might have been worked by the village residents (these fields were probably located on the nearby floodplain below the storage pits).

Syms concluded that the Snyder II site was used as a village during the protocontact period: that is, during the time when local Aboriginal groups were receiving some European items through trade but before Europeans set up trading posts in the area. The site dates very loosely to 1610 AD.

The pit also revealed pottery shards from several Late Plains Woodland vessels—artifacts that have not been found before on the Canadian plains. These artifacts were dated to about 340 years ago.

The area surrounding the Snyder II pit excavation is rich in evidence of human activities. Apart from this site, five other locations of archaeological significance have been found on Cliff Snyder’s land. Close to the Snyder II site are burial mounds and earthworks which are connected with the Devils Lake-Sourisford Burial Complex (the same burial complex that includes the nearby Sourisford Linear Burial Mounds.)

(800 AD) A brief excavation at this site uncovered two of the most complete Sonota/Besant vessels recovered in Western Canada.