A long history surrounds this Souris River crossing place. Where the Boundary Commission Trail crossed the river is still visible.

One of the most important River crossing in the southwest

Sourisford, as the name suggests, was well known as a convenient place to ford the Souris River. In this place especially, a gravel bottom spans the width of the river and the soft banks on either side were worn down by herds of bison over years of migrations. The banks of this portion of the river was a popular camping place for First Nations and the location of an impermanent village. It was also a camping place for early explorers, the Boundary Commission Surveyors and the North West Mounted Police. 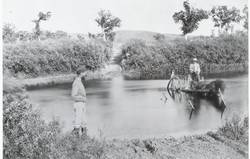 The Boundary Commission Trail crossing at the Souris River, as it looked in 1874. CREDIT: Manitoba Archives

A group of three men were the first settlers to make their way to the Souris River and build homesteads in 1882. When they arrived, they discovered a man named Charlie West had made the bank of the Souris River his home. Supposedly he had been working for the Hudson’s Bay Company and had fallen out of favour. Nevertheless, he disappeared the next spring.

Arriving from the west on the Boundary Commission Trail, Gould and Elliot built a house and barn at the crossing of the Trail and the river. With the increase of settlement travel westward, their home became established as a regular “stopping place.” Many settlers were relieved to arrive at Gould and Elliot’s where there were warm and comfortable stables and a hot meal served in the house for a very moderate price.

The stopping place slowly grew into a small unofficial community. During the summer of 1882 a store was operated out of a tent by settlers Warren and Snider. A regular post office called “Sourisford” was installed the next year. T. B. Gerry opened a blacksmith shop and F. B. Warren opened a store which operated for two or three years.

In 1882 two early settlers, Carbert and Lett, planned a subdivision for “Souris City” on the east side of the Souris River. The town was extensively advertised, with large maps showing a town of 2,088 lots. It was touted as becoming a major manufacturing centre amidst splendid agricultural land and on the banks of a river that could connect to larger centers. In July of 1883, the registrar’s office for the Souris River area moved from Deloraine to the site of Souris City. The registrar, Mr. J. P. Alexander, built his home on the site—the only building that was ever built in Souris City. Though lots were sold to people as far away as the Maritimes, Souris City never took off because of a town downriver (present-day Souris) that was already registered under that name. Souris City, also known as Sourisapolis, was officially canceled as a town plan in 1916.

Oldest Picnic Area in the West

Today, Sourisford is the location of one of the earliest regularly used recreation sites in rural Manitoba. As far back as August 1882, in a beautiful grove near Gould's home, a crowd bigger than any other in southwest Manitoba at that time gathered for a picnic. Since then, picnics have been held in the grove every summer. These gatherings used to attract thousands of locals and visitors alike, many from the United States. Bannock with syrup would be served up, along with a dinner laid out on blankets in true picnic style. Short addresses were sometimes given before a band played to liven things up. In 1903 the event became a combination between track and field activities and a bush picnic. The town of Melita declared the day a holiday so that everyone could attend.

In 1939, Francis Coulter donated the land the picnic was held on and it was designated as Coulter Park. Gould's stone house also remains preserved on the site as a last reminder of the town of Sourisford.

American Fur Co. Company Fort
(1808-1828) The American Fur Company traded on the Souris River until their operations were shut down by Cuthbert Grant. The exact location of this fort is unknown.

Boundary Commission Trail
(Pre 1600 - 1885) The Boundary Commission Trail was the first “highway” to the west, carrying First Nations to and fro, Métis on buffalo hunts and finally Europeans looking for rich farmland.
Coulter Park
Coulter Park is the site of the longest running annual picnic. Ever since 1882 it has been used as a recreational facility.
Gros Ventre Village
(1812) A First Nations village once existed at the intersection of the South Antler and Souris Rivers.
Peninsula School
(1901-1960)
Sourisapolis (Souris City)
(1882 – 1916) A few real estate agents sold lots trying to promote the town of Sourisapolis, but a town was never built here.
Sourisford Park Campground
Located in the Heritage-rich Souris River Valley, this is western Canada’s oldest campground, in use since 1882. Limited services. PHONE: 204-522-3263