(1892 – 1966) The grounds of Strathallen School are still in occasional use today as a community gathering place and baseball field. 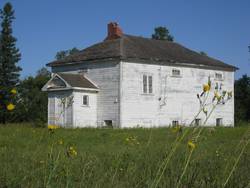 The Strathallen School District was established on March 31st, 1891. Before the school was constructed, Mrs. Brondgeest, who lived on the neighbouring section, offered a room in her house where classes were held until the schoolhouse was built. The school was built in 1892 about seven miles (11 kms) southwest of Boissevain along the old No. 3 Highway. A contractor from Boissevain, H. Bunting, built the schoolhouse for $600 on land owned by three Drummond brothers. The oldest of the brothers inherited the title Viscount Strathallen, and the name stuck to the school and district.

Because of a lack of students, Strathallen school operated in consolidation with neighbouring districts Petersburg and Mountainside from 1911 to 1915. The arrangement was then discovered to be unsuitable and was dissolved. From 1918 to 1925 the school closed down completely due to lack of students, except for two months in 1921 when it opened briefly with five children in attendance.

In the mid-1920s there was an influx of Mennonites immigrating from Russia and the Ukraine to the area and they enabled the school to remain open for the following four decades. Late in 1924, the teacher at the time, Alice Piper, stood before a class of 16 children – thirteen of whom dressed differently, possessed strange customs and spoke not a word of English. You can imagine how the three Anglo-Saxon children in attendance looked upon the majority of the student body with some trepidation. In 1944 the school was found to be too small and a new one was constructed on the same site.

During the years following the 1940s, the students from Strathallen School became well known for excelling in sports such as softball, track and field, soccer and hockey. Many girls graduated from the school and became teachers themselves at tender ages, some as young as 16. They took on teaching duties and had to deal with rough, unruly boys who were often much bigger than they were themselves.

Consolidation and Present-Day Use

The school shut down for good in 1966 with the consolidation of rural school districts. Today, the schoolhouse is still on its original site, though the building is too unstable to enter. The schoolyard is still used as a community/youth centre of sorts. Families living in the area hold baseball games in the field and picnics beneath the trees surrounding the playing field. It is one of the few schools in the area with grounds that are still being used today.

Boiler Trail
(1880 – 1885) The Boiler Trail provided a detour around the muddiest section of the Boundary Commission Trail.

CPR-Pembina Branch to Deloraine
The CPR reached Deloraine in 1886.
Mennonite Cemetery
(1925 – 1968) The first cemetery of the Mennonite Church in southwest Manitoba.
Mennonite Church
(1939 – 1960) Mennonites from Eastern Europe and Russia immigrated to the Whitewater area in 1923 and built this church.