The Last Remnant of the Glaciers

The glaciers that once covered all of Canada began to disappear about 12,000 years ago. As they melted, huge lakes were created which eventually poured into rivers and shrunk into today's present-day bodies of water. Whitewater Lake is the last evidence of Lake Souris which once covered the region between Turtle Mountain and the Souris River. 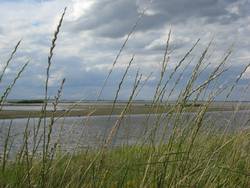 Whitewater Lake is an important body of water, both historically and to the present day. CREDIT: Teyana Neufeld, TM-SPHA

Whitewater lake is a body of water that stretches for about 12 miles (almost 20 kms) along the level prairie north of Turtle Mountain. It is fed primarily by creeks from the mountain during heavy rains and the spring run-off. The lake has very little depth and is surrounded by gently rolling prairie which was observed by J. F. Tennant in 1881 to be “completely destitute of timber.”

The plains around Whitewater Lake were well-known to Assiniboine and later Métis as a place frequented by grazing herds of bison. Red River Métis bison hunts – peaking with the involvement of 1,200 carts in 1840 – took place near the southern shores of the lake. The last bison recorded being seen in the Turtle Mountain area was spotted just to the east of Whitewater Lake in 1883.

The abundance of fur-bearing animals, including mink and muskrat, attracted many trappers and traders to the Souris basin and particularly to Whitewater Lake. The muskrat furs that came from Whitewater Lake were of especially handsome quality and fetched a good price.

After settlers started up homes and farms in the area, the frozen expanse of Whitewater Lake was put to good use during the winter months as a road. Teams of horses transported loads of grain from farms on the north side of the lake to Whitewater village on the southern shore. Firewood from Turtle Mountain was hauled in caravans of sleighs to homes north of the lake, and the road across the ice often became a very busy highway.

Whitewater Lake was the traditional nesting grounds for the whooping and sandhill cranes until their near extinction around 1879 and 1883, respectively. The lakeshore continues to be a favourite nesting and gathering ground for many species of waterfowl and shorebirds. Though the number of birds on the lake in modern times does not come close to the numbers that found the area to their liking during settler days, it remains an important stopping place for birds during migration. A birding sanctuary on the southern shore is a popular spot among birders.

Whitewater Lake is perhaps best known for its fluctuating water levels. It has gone dry on several occasions during years of drought. On historical maps depicting the area, a trail made by the explorer Alexander Henry Jr. in 1806 cuts across a huge portion of land that is now occupied by Whitewater Lake. One First Nations elder recalled it was so dry in 1870 that fur traders had a trail across the lake bed made by Red River carts. In 1913 the lake dried up, and government engineers surveyed the land, reporting that it should be sold for $25.00 an acre as farmland. But by the next spring it was a lake again! During the “Dirty Thirties” it once again dis-appeared and over the lake bed appeared a mess of criss-crossing dirt- track roads.

The lake hasn't been completely dry ever since, though water levels fell dramatically in 1988, and spectacular storms of dust and salt – visible for miles – rose from the lakebed. But over a dozen years before that, between the years 1973 and 1976, nearby farmers had flooding problems due to the highest water levels recorded in 50 years .

The future of Whitewater Lake is uncertain, given current conditions. The polluting effects of modern technology and machinery are turning the lake into a dumping ground for agricultural wastes. But whatever its future, Whitewater Lake has played a vital part of this area's history. An important feature to the wildlife of the region, bison, first peoples, Métis, and settlers, this over-sized slough must be given credit for helping to shape the area into what it is today.

Tennant, J.F. Meet You on the Trail or West Before the Railroad Volume II, Jottings from a Buckboard 1881. Winnipeg: Boundary Commission—NWMP Trail Association, 1991.

CPR-Pembina Branch to Deloraine
The CPR reached Deloraine in 1886.

Mennonite Cemetery
(1925 – 1968) The first cemetery of the Mennonite Church in southwest Manitoba.
Mennonite Church
(1939 – 1960) Mennonites from Eastern Europe and Russia immigrated to the Whitewater area in 1923 and built this church.