The Yellow Quill trail is still visible in this location.

Accessing the Southwest by Trail

The Yellow Quill Trail began as a trade route used by First Nations. As European influence in southwestern Manitoba grew, explorers, fur traders and buffalo hunters from the Red River Settlement found the trail a convenient avenue of travel as well.

The first farming settlers came to the area initially via one of two trails. The Boundary Commission Trail ran a few miles north of the border and carried settlers arriving in Emerson west to the Turtle Mountain and Souris basin areas. The Yellow Quill Trail was used more by settlers leaving Fort Garry (present-day Winnipeg) hoping to live in the Brandon Hills or other places along the Assiniboine River. For a few years the trail became a major artery of travel.

The Carlton Trail provided a link between Fort Garry on the Red River and Upper Fort des Prairies (present-day Edmonton). The Yellow Quill Trail branched off of the Carleton Trail at present-day Portage La Prairie and ran southwest until it united with the Boundary Commission Trail just before the present-day Saskatchewan border. 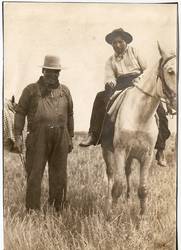 The Yellow Quill Trail takes its name from Chief Yellow Quill who was chief over a band of Saulteaux First Nations living near Portage La Prairie during the late 1800s. He is known for signing a treaty for land allotment with the Canadian Government in 1875 and for being Chief over two Indian Reservations: Swan Lake No. 7, and Long Plains No. 6.

There are mixed accounts as to the character of Chief Yellow Quill. Some say that he was an arrogant leader who was uncooperative and not always diplomatic. Others report that he was a highly respected citizen of the prairies and a prominent figure in the early days of the Portage La Prairie area. Yellow Quill had his arm amputated as the result of an accident with a musket-loading shotgun.

The Salteaux under Chief Yellow Quill made a living from hunting and trapping. The women made braided mats and woven baskets to sell. In the summer they picked pails of fruit which they sold for 25 cents a pail. On Christmas and New Year's Day the Salteaux left the reserve and visited homes in the growing town of Portage La Prairie looking for dinner, which they always received. If they could not finish the meal given to them, they would find some way to take it home with them, even if it meant wrapping it up for take-out in a smock or apron. At most homes they were very well received.

Chief Yellow Quill and his people were known for traveling the Assiniboine River and the Yellow Quill Trail that ran parallel to it for a ways. Even after European settlement came to the Manitoban prairies and land that the trail crossed became privately owned, Chief Yellow Quill's Salteaux continued to use it for travel. It was their trail.

Today, a street and hotel in Portage La Prairie are named after the Yellow Quill Trail. There are still several places, especially near Melita and along the Souris River, where it is faintly visible, but evidence of its existence elsewhere has been virtually wiped out by modern activities.

A.F. Jensen Trophy Room
A collection of trophy-hunted animals from around the world. Located beside the Antler River Historical Museum in Melita. PHONE: 204-522-3438