Over the span of his nearly 100 years he became a sailor, farmer, veterinarian, gold-panner and dedicated community worker 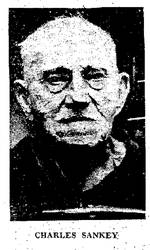 Charles Sankey is undeniably one of the most colourful characters from Waskada’s history. After spending his youth adventuring, he found a small prairie community to call home.

Born in Ireland in 1863, Sankey was educated by a governess until the age of twelve. His father was the manager of the Brookboro Estate, and when he died, Sankey was sent to Germany to live with his uncle. There it was decided that he would join the Merchant Marines. After training on the HMS Conway in London, his first sea voyage was to China and Australia aboard the Barque Fantasie when he was 16 years old.

He touched land for only five days before being called to join the crew of the famous clipper the Cutty Sark. Sankey embarked on a two-year long adventure, travelling all around the world. Sankey departed from his sailing career in 1882 and went to join his family in Toronto where they had emigrated from Ireland. He soon struck out west, following his brothers to Boissevain, Manitoba where they were farming. He settled on a homestead there for a few years where he raised cattle.

In 1894 he moved back to Ontario to attend the Ontario Veterinary College. He graduated with flying colours, winning the coveted Gold Medal. He began his career as a veterinarian in New York state working as an inspector for the inter-state shipment of cattle. He worked there for three years before returning to Boissevain to practice.

In 1899 he accompanied his mother on a move to California for her health. After getting her comfortably settled, he took off for a few months to pursue gold in Alaska and the Yukon. He returned to Manitoba in the fall and sought out Waskada as a place to live. He arrived there barely before the railway, walking the 28 kilometers from Deloraine along the raised grade before the tracks were laid.

It was in Waskada, after all his worldly travels and adventuring, that he found a place to call home. He married Anna Josephine Ponton from Ontario in 1903. She died giving birth to their first son. Sankey later remarried to Anna Grace McGill and together they had three children.

Charles Sankey was an intellectual with an active mind and an interest in reading and current events. His experiences abroad no doubt offered him a unique perspective to contribute to the small agricultural community of Waskada.

Sankey cared passionately about the welfare of his community and invested many decades of his life to public service. For 25 years he was the secretary-treasurer for Brenda Municipality, and served for 35 years on the town council and 32 years on the school board. He was the visionary and driving force behind the Waskada Park, the creation of which brought him great pride.

Photo: Tillenius, Anna. “Ordeal of the Cutty Sark: A True Story of Murder and Mutiny on the High Seas.” Winnipeg Free Press. May 11, 1957.