Fort Mr. Grant had the greatest political and social impact of any of the Souris River forts.

Born in 1796, Cuthbert James Grant was the son of Cuthbert Grant Sr, a Scottish trader working for the North West Company (NWCo), and a Cree woman from the Qu’Appelle Valley. After his father’s death in 1799, Grant was sent by the NWCo to Montreal where he was educated. Grant returned to the West in 1812 and was placed in charge of a small NWCo post on the Qu’Appelle River.

The young trader became a staunch supporter of the NWCo and a bitter opponent of the rival Hudson’s Bay Company (HBC). Grant’s leadership qualities in addition to his Métis heritage quickly earned him considerable influence among the Métis. In 1816, he led the skirmish at the Battle of Seven Oaks, which ended in the death of Governor Semple and a number of Red River settlers. Throughout the conflicts that he led or was a part of, he was known for keeping his word. His actions were always committed with wholehearted loyalty to his company and co-operation with his peers and associates.

In 1821 the HBC and NWCo amalgamated and Grant was taken into the service of the new company. In 1824 he was given an outfit and licence to trade from Turtle Mountain to the Qu’Appelle Valley. Also in 1824, Grant accepted a block of land bordering the Assiniboine River and founded a settlement there, which he named Grantown. This settlement still flourishes today under the name of St. François Xavier. 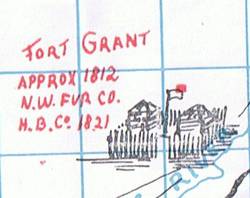 A drawing by Boissevain-area historian Bill Moncur on one of his regional maps.

Trading on the Souris River

Fort Mr. Grant was built sometime between 1824 and 1826 on the Souris River. In 1828 the HBC gave Grant the title “Warden of the Plains” with the duty to keep independent and American traders out of the Souris River valley. Americans were in the habit of sneaking across the Canada-US border to trap furs and smuggle American whiskey into southwestern Manitoba, an activity which Grant was given the authority to interrupt and effectively stop. Fiercely loyal to his company, Grant did his duty with a passion. By the end of the next year the American forts along the Souris were abandoned.

At one point, American traders threatened to destroy Fort Mr. Grant, claiming it was on American soil. The HBC sent a surveyor to place the 49th parallel, and it was found that Grant’s fort was a full 33 miles (53 kms) north of the border. This gave Grant the authority to seize persons and their property not authorized to trade outside the United States. In 1824 Grant also had trouble with some Assiniboine who threatened to destroy his fort. He was able to defuse the situation, though, so that trading could resume.

In addition to his duties as a warden, Grant operated a successful fur trading post. Using the Yellow Quill Trail to the north of the fort, he carted furs to Fort Garry (Winnipeg) and supplies back to his fort. The Souris River was also used as a freightway and in one of his better years, Grant shipped over 50,000 furs and robes by boat to Fort Garry.

Cuthbert Grant died in 1854 after falling off a horse. The next year Fort Mr. Grant became a wintering post only, operating under the management of his relatives. By this time business was greatly reduced, consisting of buffalo robes, wolf skins and a few muskrats. After 1861 there is no further mention of the fort in HBC records. When it closed, some of the workers remained in the area, settling and raising livestock and crops. They became the first permanent settlers of the Hartney-Lauder area and the town of Grande Clairière.

Evidence of Fort Mr. Grant remains today in the form of six cellar holes. It was not a large fort but sturdily built, measuring some 150 by 120 feet in size, and situated on the north bank of the Souris River. No river erosion of the site has taken place, unlike other forts along the Souris River.