One spring day in 1885, 30 year old Father Gaire came home from Mass to find a brochure in his mailbox. It had been written by a French-Canadian Priest, inviting Frenchmen to immigrate to Canada. Gaire felt called by God to help populate western Canada with colonists and eventually he was granted permission from his bishop to go.

He arrived in Winnipeg on May 21st 1888. His wish was to establish a parish in the western part of the province, so he boarded a train to take him to Oak Lake, the most westerly parish accessible by train. Once there, he struck out to the southwest to find a suitable location to establish a new community. A little to the east of the marshy Maple Lake he found a great big clearing that pleased him, just on the northern edge of the Lauder Sandhills. He decided to establish his community here and name it “Grande Clairière”. 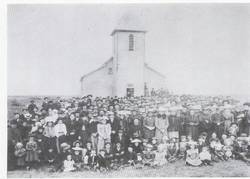 Gaire applied for a homestead near to the only other house that was in the area: that of the family of Thomas Breland. The Métis family (who likely settled in the area after Fort Mr. Grant shut down) welcomed the enthusiastic young priest. Using the simple table in the Breland’s home as an altar, Gaire held his first Mass on July 22, 1888. In attendance were the three Metis families who lived nearby which amounted to 16 people.

He soon realised that the 4 by 5 meter house he built originally was too small for the variety of functions it was asked to perform: that of kitchen, dining room, parlour, bedroom and chapel. Accompanied by some of his parishioners, Gaire began an addition to his house that would serve as a chapel. It celebrated its first Mass on Nov. 25th and was attended by eight Metis families, two French-Canadian families and two families from France. It was still a modest number, but Gaire was pleased that numbers in his services had tripled over a period of only three months.

In the spring of that year new settlers began arriving from France and by July there were 43 homes and almost 150 people in Grande Clairière. During the winter of 1889—1890 Gaire travelled to France for a month to act as an “Immigration Agent” for the Canadian Government. He was overwhelmingly successful: 80 French and Belgium families accompanied him back to Winnipeg, 40 of which continued on to Grande Clairière.

In 1890 Father Gaire began building the community's first proper church. It began by measuring 10 by 5 metres. Very soon it was realised that the growing congregation would need much more space and it was enlarged to a magnificent 10 by 26 metres, 9 metres high with seating for 300 people. New colonists were always arriving. A wave of settlers in 1892 swelled Grande Clairière’s numbers to 400 people. The church that stands in Grande Clairière today was built in 1907 after a cyclone ripped the former one down. The body of this church remains today, a 12 by 18 metre structure with a vaulted ceiling 8 metres high. In 1923 a bell, front entrance and sacristy completed the St. Jean Catholic Church. Services are still held in this building today.

The population of Grande Clairière continued to increase. When it rose to 600 Father Gaire realised that he would have to establish colonies elsewhere. He began settlements to the west in Saskatchewan: Bellegarde and Cantal. These communities didn't get resident priests until 1898, so from time to time Gaire went on foot to visit.

In 1903 Father Gaire left Grande Clairière, his dreams upon founding it having been met. He was transferred to a new mission in Saskatchewan and another priest took his place. Since Father Gaire, 13 priests have taken up duties in the St. Jean Parish. Grande Clairière continued to grow, though its numbers fell somewhat in 1905. Due in part to the colonies that Gaire established to the west and also in part to individual families picking up to move further west to take advantage of the rich homesteads available there. Still, there remained a good 60 established families. The community gained shops and services such as a post office, general store and community hall. Today Grande Clairière consists of the Church and cemetery surrounded by a few houses, only several of which are occupied.