The largest lake on Turtle Mountain: discovered as a recreational paradise!

The uneven bushland surrounding Lake Metigoshe was originally considered undesirable by European settlers. At first, the only permanent settlers were part of the vibrant community established by the Métis after 1908, whose hunting and trapping lifestyle suited the landscape perfectly. However, this is not to say that the settlers taking up farms in the vicinity of Deloraine and Bottineau did not recognise the recreational potential of Lake Metigoshe. 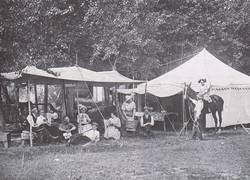 Campers on the north shore of Lake Metigoshe in 1910.

The bulk of Lake Metigoshe lies in North Dakota, with only 60 out of 1,580 acres lying in Canada. The lake is the largest water body on Turtle Mountain, and one of the largest permanent freshwater lakes in the state of North Dakota. The surface of the lake is decorated by six wooded islands which range from one half to 27 acres. The lake has a maximum depth of 23 feet.

Recreation South of the Line

Perhaps due to the greater surface area of the lake being in the United States, the Americans were quicker to discover the recreational possibilities at Lake Metigoshe. Originally called Fish Lake, it was renamed Lake Farquhar by the United States Boundary Commission Surveyors who passed through the region in 1873-4 marking out the boundary of the 49th parallel. The name did not stick. Instead “Metigoshe” was popularised by James Dawson, one of the earliest trapper-traders who settled on the west bank of the lake, south of the border. The name came from the Chippewa phrase Metigoshe Washegum which means “clear lake surrounded by oak trees.” Dawson was the first to capitalise on the recreation qualities of the lake: as early as 1889 he put out boats for hire.

Hotels were built south of the line to cater to vacationers. The first, Lakeview House, was built in 1890 on the west side of the lake. It boasted 23 rooms and a sailboat, the May Queen, to amuse visitors. Half a dozen cottages were built around the hotel and a large barn to house guest’s horses.

In 1899 Lake Central House was built on the east shore, surrounded by 65 acres of surveyed and plotted properties for summer homes. There were also cottages available for rent surrounding the hotel and a store. The restaurant in the hotel could seat 50, or the tables cleared and the space used for dances. A bath house was erected on a nearby beach, and bathing suits were available for rent.

The development of recreation activities on the Canadian side of the lake was nearly 20 years behind the Americans. In 1908 Samuel K. Colquhoun, a merchant from Deloraine, and Charles F. Hasselfield, a pharmacist, cleared the first campsites north of the border. Locals joined them.

Meanwhile, in the States, a long distance telephone line was installed in 1909 and the road from Bottineau to Lake Metigoshe was widened and graded. Stagecoaches, horse teams and automobiles passed daily along the road and the mail was delivered three times a week to Lake Metigoshe’s two post offices, Washegum P.O. on the west shore, and Metigoshe P.O. in the store on the east shore.

First Cabin on the North Shore

The thirties brought fresh energy to both sides of the lake. Samuel Colquhoun’s son Martin Colquhoun built the first summer log cottage on the north shore in 1931. His example was followed and many other cottages appeared on the lake over the next few years. Mr and Mrs Fred Thompson operated the first store to serve the vacationers north of the line in the late thirties. The store had an outdoor dance floor attached. This small log store served the community until 1963, when a new store was built.

Lake Metigoshe State Park came into being in 1934, south of the border on the east side of the lake. The park facilities were built by workers in a transient camp: swimming beach, dock and bath house; boat launching site, numerous walking trails, camping and picnic areas.

Today Lake Metigoshe is still booming as a popular vacation destination, on both sides of the border. In the 1980s the face of the lake began to change as more summer vacationers turned into four-season residents. This change was greatly facilitated by better road access and rural electricity. To many, Metigoshe has taken on a community spirit of its own.