Samuel Colquhoun was the first person in Canada to take advantage of recreational potential at Lake Metigoshe. He travelled by horse from Deloraine in 1908 and set up a tent. Samuel’s son Martin built the first cabin on the Canadian side of Lake Metigoshe in 1931, a cabin that his son Mac visited every summer for most of his life. Mac passed away in 1999, but I sat down with his wife Shirley and daughter Colleen, hoping to get a feeling for what summers at Metigoshe were like 50 years ago.* 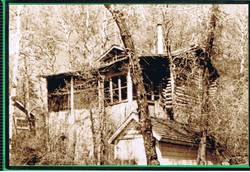 The first cabin on the Canadian side of Lake Metigoshe was built by Martin Colquhoun, Mac's father.

Shirley met Mac when he was studying law at the University of Manitoba in Winnipeg. They were married in 1942 and Shirley visited Lake Metigoshe for the first time on their honeymoon. The couple spent the next 30 years living and working in Winnipeg, Deloraine and Morden: but wherever they were, every summer they travelled to Lake Metigoshe to vacation at the cabin Mac’s father had built.

By the time Mac married Shirley, he had been visiting the lake for over ten years. Yet vacationers around the lake were still scarce — they were nearly the only ones there on their honeymoon. Their early neighbours around the lake included Bill Rosentreader who Shirley remembers “had a shack, where he cut ice in the winter and we’d go down and buy a piece off him for our icebox. Then we packed it in sawdust to keep it cool.”

Lake Metigoshe was much shallower in those days than it is today – so shallow that the road was built in front of the cabins, not behind as it runs now. In 1937 the Americans put a dam in, which caused the water level to rise. Before the dam, Lake Hasselfield (a small lake immediately north of Lake Metigoshe) was nothing more than a depression filled with bulrushes. When people started building cabins on Hasselfield, Shirley remembers her husband’s surprise. “‘Oh my god,’ he says ‘people are building on Hasselfield. When we were kids it was just a slough, we played over there on rafts.’”

In the early days there were more cabins and more people on the lake south of the border. Shirley remembers a fellow by the name of Happy Armstrong who had a place on the American side; a dock and a shack where he sold gas and minnows. In the 1940s “he ran rides. He had a great big motorboat – big enough for 10 to 12 people – and on the side it said ‘Rides to Canada 25 Cents.’ He wore a sailor’s cap and he’d take a load on over there and bring them up here and tour them around a little bit.”

Mac and Shirley’s kids grew up spending summers at the lake. The whole family moved to the cabin as soon as school let out in the spring and didn’t go back to town until the day before school started. Most of the people who vacationed at the lake were the families of businessmen who worked in town. While the men would go back and forth to town every day for work the women and kids stayed at the lake. The 450 Highway at the time was not graveled and it turned to mud whenever it rained. “If it started raining, the men all took off for town because the road was so bad.” Shirley remembers, “But the kids used to like it because it was kind of hilly, and Mac would give the gas over the hills.”

The log cabin the family lived in was quite small, and bedrooms were created by using hanging cloth. “The kids slept out on the deck, on the verandah, and they’d fight for the best beds,” says Shirley. “When it started to rain I’d have to get up and put plastic over them so they wouldn’t get wet.” Inside the cabin they had hot plates to cook on and a little gas stove. It was the kids’ chore in the morning to go get a bucket of water from the well before they could go out to play. Shirley’s daughter Colleen remembers: “We washed on a washstand outside the cabin and brushed our teeth and everything there. Then every night everybody would have a bath in the lake with a bar of soap to wash their hair. There were no showers here, but we were pretty clean.” Shirley sums it up with the statement “It was really camping, but you had a roof over your head. It was good.”

Shirley and Mac, canoeing at Lake Metigoshe in 1944.

Colleen and her sisters Susan and Wendy took swimming lessons at the lake in the summer, which were taught by the Blue Cross. After swimming lessons there would be a bonfire, picnic and hotdogs on the beach. During the day they hung out with the other kids; rafting and hunting for frogs and turtles. They sold the frogs to fishermen to use as bait. The turtles they sometimes sold to be used in races at the Turtle Derby in Boissevain. There were campfires most evenings and songs around the fire. Shirley reflects: “Now, the kids have all the toys to play with in the water. But my kids had to make their fun.” They did a lot of canoeing – Colleen remembers that her “grandpa had a canoe that had a sail on it. Our fishboat was just oars; we didn’t have a motor for a long time. Usually we made homemade rafts and went out to the island or around the bay.”

“The kids went through more bathing suits then,” Shirley remembers, “because they wouldn’t put any clothes on except their bathing suits; they’d wear them out by sitting on the docks. And they could go up and down the beach here and play off everybody’s dock.” It was a very open and welcoming place to spend the summer.

“Your kids were safe and you didn’t have to worry about them being out, because everybody looked after everybody’s children. If someone was in trouble they’d run and help them. Or you could just go to somebody’s house and borrow what you wanted, say a cup of sugar or whatever. It made for a very relaxed summer.”

The lake became a popular holiday destination for some of Shirley’s relatives as well: “I have a nephew, Gordon Murray, whose parents used to come up every summer; they lived in California. They liked to come for the races in Deloraine at the end of June. But when it came time to go home, he’d hide: he didn’t want to go! So his mother said ‘we’ll leave him here and you can send him home in the fall.’ So he stayed every summer here with us and we put him on a plane when it was time for school.” Gordon Murray still visits Lake Metigoshe every summer.

Only about 5% of Lake Metigoshe is in Canada, the rest is over the border in the States. Back then crossing over the border wasn’t a big deal. Colleen remembers that “when we were kids, we could just go back and forth; there was no problem at all. The boy scouts had a camp just over the border, and they would come by canoe, park down by the main beach and go up to the store and get toffee every day. That was their treat. There’d be 10 or 15 canoes of them going by.”

The Colquhouns had the first television at the lake and friends and neighbours would come over to watch it. Shirley remembers specifically that everyone came over to watch Neil Armstrong when he landed on the moon. The neighbourhood kids would also gather at their house to watch different shows.

In 1972 it was time to retire the old log cabin built by Mac’s father. Mac and Shirley replaced it with the first four-season cabin at Lake Metigoshe, which allowed them to stay at the lake year-round. The Colquhouns got one of the first phone lines put in: in those days, the phone operator was one way of keeping track of your kids. Shirley found it convenient: “I could just phone the operator and say ‘do you know where Colleen is?’ and they’d say ‘Oh yeah, she’s over at so and so’s playing cards.’ Or the kids could find us.’”

When the Colquhouns tore down the old cabin, they saved the logs. Mac’s dad had gotten anyone who’d stayed overnight in the cabin to put their signature on a log. They had wanted to save the logs to be re-used. Colleen described with regret what happened: “We had them sitting up here at the top of the property and somebody stole it all and used it as firewood. We were really disappointed.”

The face of Lake Metigoshe has changed considerably since the early days. “Some of the people who are building now all grew up here as kids,” says Colleen. “But there are a lot of new people.” Lots of people from Brandon, Winnipeg and Saskatchewan now have summer cabins at the lake and the community isn’t as tight-knit. “People are tearing down the small cabins that we all used to have and building big mansions.” Properties have also gone up hugely in price. Activities on the lake are different now, too. It used to be that you could fish anywhere – now if you catch a fish on American waters you have to be equipped with an American fishing license, and going back and forth across the border isn’t as simple as it used to be. Aside from these drawbacks, it is still a quiet and beautiful place to live.

Today the roads around Lake Metigoshe are named for the early families that vacationed there – many of whom are still there: Rosentreader, Price, Murray, Hasselfield, Passmore, Colquhoun, etc. The RM was going to name the roads after councilors, but Mac Colquhoun stepped in saying “I don’t think so, we were the ones that started out here.”

Five generations of the Colquhoun family continue to enjoy the beauty and recreation possibilities of Lake Metigoshe. Shirley Colquhoun, now 89, still lives on the lot where her father-in-law built the first cabin at Lake Metigoshe; Colleen lives next door. Their cabins sit side by side on the street that bears their family name.