Around 1941, a small house was built by a Métis family just to the north of Lake Dromore. The cabin, constructed from square-cut local black poplar logs, has weathered the years well and remains as a window into an important time and way of life. Though tiny for the number of people it housed, the cabin was able to fit a wood stove, table, cupboards and five tightly packed beds. Roy and Maggie McCharles moved to the Metigoshe area after being married in Deloraine in 1931. The small cabin they built became a vibrant home for them and their eventual 13 children (10 surviving into adulthood). 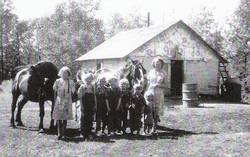 Mother Maggie McCharles and her first seven children (she gave birth to 13) in front of the tiny cabin that was the family's home. CREDIT: Mary Conway's Archival Collection

Roy made his living by working for farmers in the area in addition to cutting posts and wood to sell in Deloraine. These commodities had to be hauled via horse and sleigh in the wintertime. Roy also kept pigs, and about 10 head of cattle.

Elmer McCorrister grew up living in the Turtle Mountain bushland around Lake Metigoshe, very near to where the McCharles family built their log home. Elmer, as the kid next door, remembers spending days and nights with the McCharles family in their tiny house and helping Roy with wood-cutting and other tasks. He has fond memories of playing with the McCharles children, using cardboard boxes as toboggans to go rocketing down nearby hillsides, and using homemade skis to go tromping around the bush. He remembers one particular episode when he and all of the McCharles children pushed a wagon to the top of a hill, piled in and went barreling down again.

A popular activity in the Métis community was to hold baseball games, at which Elmer and the McCharles children had enough players to form their own team. Games would take place at Jim Stone's Field a few miles north of Lake Dromore. There would often be from 50 to 60 people at these games, either participating or visiting and picnicking on the sidelines. Another popular gathering place was Canada Creek between Lake Metigoshe and Lake Dromore, where families would meet for fishing and swimming parties. Bannock was made over the fire, slathered with cranberry or rhubarb jam, and someone usually brought meat to fry up. These gatherings could happen any day of the week, though most often on Sundays. After spending a full day from morning until evening at the creek, the gathering usually relocated to Billy Gooselin's place – known as Billy's Point – where dancing would take place deep into the night. 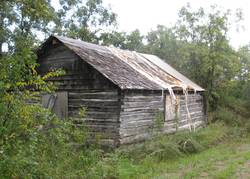 As the McCharles children grew up, the girls got married and scattered across the prairie provinces and into the States. The boys moved away looking for work because there weren't many job prospects in Metigoshe or Deloraine unless you started your own business. Roy and Maggie eventually sold their land and cabin and moved to the Margaret area to look after a ranch. In 2005 the cabin was purchased and moved about half a mile (800m) south on Lake Dromore where it was used as a barn to house horses and cattle. Since then the cabin has been sold again and is now sitting empty. Though it is beginning to deteriorate, efforts are being made to preserve the building and perhaps even renovate it for heritage purposes.