The Creation of the Lauder Sandhills

The Lauder Sandhills, several miles west of Hartney, were created between 10,000 and 8,000 years ago. When the glaciers from the last ice age receded to the north, they left huge lakes in their wake. Glacial Lake Hind covered the area around present-day Hartney. Over the site of the Lauder Sandhills a delta formed where a river ran into the still body of Lake Hind. Sand deposits built up over this spot and remained after the glacial lakes had drained from the landscape. 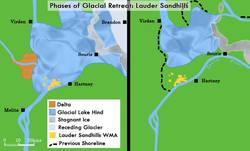 Where the Lauder Sandhills are today used to be the bottom of a glacial lake. CREDIT: Adapted from

As the climate following the ice age fluctuated, the land where the Lauder Sandhills are today cycled through very wet and very dry periods. It was alternately stabilized with wetlands such as marshes, lakes and sloughs and destabilized with desertification which facilitated dune formation. Prairie fires repeatedly swept the plains, making it difficult for vegetation to establish itself even when the area was wet enough to support life (this is why early settlers of the region went to Turtle Mountain for wood). Eventually, the climate stabilized and the humidity created by the evaporation of the wetlands promoted the growth of the current mixed forest.

Human Use and Habitation

In cycles during when vegetation was able to establish itself, the rich biodiversity of the under storey flora made the sandhills an attractive camping place for post-glacial forager societies. Research being conducted over sites in the Lauder Sandhills report artifacts that date from 400 to 6,000 years old. Interestingly, findings suggest ties to cultures usually found living around the Missouri and Mississippi Rivers. These societies have been known for their village and forager-horticultural lifestyles. The research being conducted in the area focuses on why such groups migrated to southwestern Manitoba and whether they continued their combination forager-horticultural economy here in established communities.

The conditions provided by the sheltering hills thousands of years ago were adequate to support a horticultural society: access to forest and wetlands were deciding factors, as well as proximity to the bison wandering the surrounding plains. Researchers also believe that mid-winter encampments and bison traps were established by early societies in the protection of the sandhills. Sites that have undergone archaeological digs have yielded non-local pottery fragments, raw stone material and bone fragments.

As European activity and settlement around Red River increased it began encroaching upon the bison's normal wintering habitats. The animals retreated westward and were attracted to the shelter provided by the Lauder Sandhills. The proximity of the Souris River and surrounding grasslands made the hills an appealing sanctuary. After 1820, Métis bison hunters began ranging west of Fort Garry in pursuit of the animals. Beginning in 1837 a group of 60 families from St. François Xavier began hunting in the Lauder Sandhills. They had a route which started at Turtle Mountain, went north past Whitewater Lake to the Chain Lakes, then forded the Souris River and went into the sandhills. The group made regular trips to the hills, arriving every spring and fall for the hunting season.

Permanent settlement of the Lauder Sandhills began after Fort Mr. Grant on the Souris River closed down in 1861. At this time some of the Métis traders from the fort settled in and around the sandhills and practiced mixed farming. They were joined in 1869 by some Métis from the Red River Rebellion, whose arrival increased the population of the area to about 20 families. In 1891, a band of Dakota lived for several years in the sandhills before moving to the Moose Mountains. Beginning in the early 1880s the area became populated with settlers from Ontario. Slightly later the French-speaking community of Grande Clairière was established north of the sandhills.

The Lauder Sandhills Wildlife Management Area (WMA) was established in 1971, originally to protect the winter habitat of the white-tailed deer. The protected area covers 3,145 hectares of land, or just over 12 square miles (over 30 square kms).