Archaeological Dig on the Souris River

During the summer of 1986 an archaeological dig took place at a site only two kilometres southwest of Hartney. The site was discovered when local farmer Brad Coe noticed that a section of the northern bank of the Souris River was eroding and revealing a bison bone. He informed Dr. Bev Nicholson, the staff archaeologist at Brandon University, who led the excavations at the site. 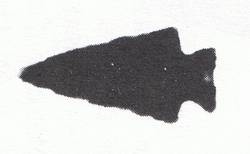 A Pelican Lake style point, similar to the one found at the Mullett Site.

By the end of the summer the team had unearthed evidence of a bison kill site. A bed of butchered bison bones was discovered at a depth of 35-45cms. Within that layer bone fragments and stone flakes belonging to a Besant occupation were found. The bone bed and accompanying artifacts were radio carbon dated to about A.D. 750.

The site had more to reveal yet: beneath this layer, cultural remains were found to a depth of 75cms. A projectile point uncovered at the site was found to be from a culture known as Pelican Lake, which dates between 1500 and 500 BCE. Artifacts found at the site indicate that it was occupied several times, probably by peoples who were attracted to the aspen parkland offered by the Souris River. The period of the site’s occupation likely stretches from the Besant Period (BCE 500 to AD 750) right up to the pre-contact era.

Dr. Nicholson was particularly interested in the Mullett Site because it revealed artifacts from both Besant and Pelican Lake cultures. Manitoba has no other significant evidence of either of these cultures, and this site is important due to the light it could shed on how aboriginal peoples from this time period subsisted. The following summer the excavation team returned to the site. They excavated an area slightly to the west of the Mullett site where they found evidence of habitation. This site produced evidence of processing activities beyond the actual killing of the bison—they found bison bones that had been completely stripped of meat and some that had had the bone marrow extracted from them.

The Mullett Site is located in an area already known for its rich heritage. The fur trading posts of Fort Mr. Grant and Ash Fort were within a kilometre of the site and the Makotchi-Ded Dontipi sites of the Lauder Sandhills—which have also seen extensive archaeological excavation—are mere kilometres away. The area is also known to have been a favourite destination for the Métis bison hunts of the mid 19th Century.

The Mullett Site was named after the owner of the land, Mrs. Edna Mullett who was a long-time resident of the area.

Peach, A. Kate. “A Faunal Analysis of the Mullett Site (DiMd-7): A Besant Processing Cite in Southwestern Manitoba." Brandon University, 1988.