(1880 – 1881) Mr. Bolton established a sawmill on the north shore of Lake Max. It was bought by George Morton the next year.

The sawmill that started out on the shore of Lake Max has a long and interesting history. For nearly 100 years it served the residents of the area, providing lumber so that the region could become populated by homes, barns and businesses. It was by no means the only sawmill on Turtle Mountain, but its duration far exceeds any others.

In 1880 Mr Bolton established a sawmill on the shore of Lake Max. The next year, entrepreneur George Morton bought the sawmill and used it to produce lumber for nearly every building in the then thriving village of Whitewater. Morton also built a planer where logs could be cut into boards. 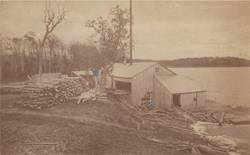 The sawmill on the edge of north shore of Lake Max, while it was owned by Mr. Morton.

The mill sat on the northern end of the lake, just west of a stream that flowed into the lake from a slough a couple hundred metres back from the shore. Cut logs were dumped into this slough. Afterwards, they were sent down a man-made channel to the lake where they were chained at the entrance to the lake from the stream. They were held here until there was room in the mill for them to be cut. The mill's boiler stack was guyed up to a majestic oak tree by a long bolt that went straight through the tree.

Mr. Morton was the type of man to be kind and helpful to anyone who had ambition. He had an optional work policy that gave some men a much appreciated boost: any man who needed lumber could come and work for the mill and get paid in lumber. This was a great help to newly arrived pioneers who hoped to establish themselves on the land but had little cash to help them on their way.

The sawmill at Lake Max also served to bring increased attention to the lake and its recreational possibilities. See Max Lake Recreation.

The sawmill went through a few different owners over its lifetime. Morton sold it to Hugh McCorquadale who later handed over its operation to Bill Harvey. In 1896 a fire was lit on Turtle Mountain from the American side. The damage it caused to the forest was extensive and wood on Turtle Mountain became a more precious commodity. After this event the timber reserve was closed to logging, which reduced the activity at the mill to a considerable extent.

In about 1910 Harvey sold the sawmill to Fred McKinney, who moved it from Lake Max two miles north to his property. His sons, Doug, Bill and Elson, joined in the operation of the mill as they grew old enough. They used the mill to do a limited amount of custom sawing until the timber reserve was opened up again in 1930. Bill Eaket soon joined in the operation, lending the use of his gas-powered tractor to run the mill.

Everything except for the actual sawing of the lumber was up to the customer to do. Trees were felled (by hand), trimmed and hauled (by horse) to the mill where they were sawed. The cost of this service was $10 to $12 per 1000 board feet.

The sawmill generated copious amounts of sawdust, which was put to use by the Municipality of Morton during the early 1930s. After being hauled to town the sawdust was mixed with arsenic and molasses and churned in a small cement mixer. This mixture was then spread along the road allowances to kill grasshoppers.

In 1938 Bill Eaket dropped out of the operation and Bill and Doug took over the business from their father. They ran the mill for an additional 25 years. During this time they were mostly sawing for local farmers who needed lumber to construct buildings, corrals and hay shelters.

In 1968 operation of the mill ceased because the operators couldn’t hire help to keep the sawmill running. At this time, Tom Conroy saw an opportunity to purchase the mill in 1971 and move it to his farm, located near Mountainside. Conroy had always been infatuated by sawmills and kept the mill as a hobby and side business. Mostly he cut boards for his own use and did a very limited amount of custom sawing during his spare time. In 1981 the sawmill saw its 100th year of operation.

The sawmill has been out of regular operation for about 25 years now, though it would still operate with a bit of fixing up. The equipment in the mill is over 120 years old, being the very same equipment that Morton used so many years ago to saw lumber for prairie settlers. The blade is the only piece that has been replaced, as the original one was burned in the 1896 fire.

Max Lake Recreation
(1898 – Present) Max Lake has long been a holiday destination spot.
Morton Sawmill
(1882 – 1988) George Morton bought this sawmill from Mr. Bolton. It sat on the shore of Lake Max until a forest fire destroyed much of the available timber. It continued operations to the north.