(1898 – Present) Max Lake has long been a holiday destination spot.

As the largest lake in what is now Turtle Mountain Provincial Park, Max Lake was the natural location of choice for summer holidaying.

One of the first events to pull attention to the lake was the construction of the Bolton Sawmill on the north bank in 1881. In 1882 the mill was bought by George Morton to provide lumber for the village of Whitewater and Town of Boissevain. The mill’s operation brought men to the lake to work and established regular activity in the area.

Despite its business-like beginning, activity around Lake Max has generally been pleasurable in nature. George Morton kicked off leisure activities around the lake with a small steam launch that he named Lady of the Lake. He used this boat to give pleasure cruises around the lake to his friends and visitors. 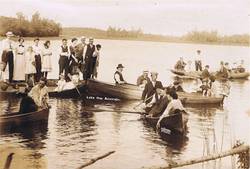 Around the turn of the century, horses replaced oxen and travelling became much less difficult. Several townspeople from Boissevain decided that Max Lake’s Arbor Island (then known as “90 Acre Island” – a slight misnomer, as the island is in fact 25 acres larger than the name suggests) would be an excellent place for a summer holiday spot. Bob Hurt, who had been the engineer for Morton’s Sawmill, built the first cottage on Arbor Island in 1898. The cabin logs were cut during the winter and hauled over the ice to the island by horses. In the space of 15 years, nine other cottages appeared. These—along with many tents—housed temporary lake-dwellers who numbered in the hundreds.

Summers at the Lake

Families began spending weekends or summer holidays down at the lake; enjoying the peace and quiet of the area, a closeness to nature and the chance to socialise with friends. Many happy memories were made on the waters or banks of Max Lake: learning how to swim, dive and row a boat; rowing across to the mainland to play a game of baseball until dark before returning to the island for a bonfire. Alice Hurt remembers: “The first time I saw the island at the Lake must have been about 1898, when our cottage was being built. We crossed at the northwest corner of the island, in a home made boat of sievelike quality. Two people baled madly while one rowed, and the passengers prayed. I was terrified.”

Aside from holidaying, groups of people made trips down to the lake to pick berries. They brought tents, bedding and jam-making supplies along with them so that after staying for a few days of picking they could set up and make jam right there on the spot.

Lady of the Lake

Bob Hurt took over operation of the Lady of the Lake which he filled with 20 to 25 passengers before taking a tour around the lake, visiting many of its hidden beauty spots. Usually someone had a mouth organ or banjo and Bob Hurt would sing. If it was calm, the motor would be shut off and the boat allowed to drift at sunset . . . music floating off across the water.

For the average family Max Lake was a two hour drive from Boissevain with a team of horses – nothing like the fifteen minute journey in a vehicle the same trip would take today. And the road was not the smooth gravel that we enjoy today, either. The only trail to the lake was “paved” with logs that had been laid side to side. The road served its purpose as long as there was dry weather. After a rain, however, the Turtle Mountain clay got muddy and sticky and the heavy foliage overhead kept the trail from drying out quickly. From the mainland, there were three motorboats, one sailboat and many rowboats to transport people to Arbor Island.

During the drought in the 1930s activity around the lake began to decline. Many cottages were torn down and used for firewood. The lake was so dry that a person could walk from the mainland to Arbor Island in rubber boots.

The lake’s resurgence in popularity came in the early 1960’s with the construction of six new cabins. In 1962 Max Lake road was paved with gravel, making the trip faster and easier. Max Lake is still a popular camping and cottage area.

Bolton's Sawmill
(1880 – 1881) Mr. Bolton established a sawmill on the north shore of Lake Max. It was bought by George Morton the next year.

Max Lake Campground
Nearby Lake Max and boat launch area. Phone: 1-800-214-6497
Morton Sawmill
(1882 – 1988) George Morton bought this sawmill from Mr. Bolton. It sat on the shore of Lake Max until a forest fire destroyed much of the available timber. It continued operations to the north.