The presence of coal in Manitoba is a rarity in and of itself, but the presence of coal appearing in minable quantity is rarer still. No one ever got rich from mining Turtle Mountain coal, though newspaper articles and dreams of success ran high with excitement at the time. It was true that there were "Millions of Tons of Coal Near Deloraine" as one headline read, but getting the "black diamonds" out of the ground was something else entirely. 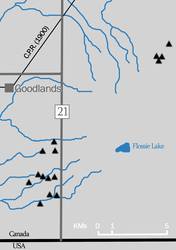 Some 15 coal mines operated south and east of Goodlands at some time between 1883 and 1943.

The seams of lignite coal that were discovered in southwest Manitoba were created approximately 65 million years ago. At that time a large sea covered much of the mid-Americas and was fed by a river that formed a delta over present-day Turtle Mountain. This delta created a swamp where plants grew and died and were eventually transformed into peat. The peat came to be buried under the river by sandstone, the pressure of which eventually converted the peat into coal.

There were two distinct eras of Turtle Mountain mining: from 1883 to 1908, and then again from 1931 to 1943. The coal supplied locals with cheap fuel, provided jobs when employment was badly needed, and made the district more alluring to the incoming settler as a place to live.

The Saga of the Early Mines

More often than not coal seams were discovered by mistake and mined by the farmer who owned the land. A few coal mining companies put faith in Turtle Mountain coal, but none were as successful as they hoped. The first attempt at commercial mining in Manitoba history was made in 1883 at the Lennox Mine about 14 miles (23.5 kms) southwest of Deloraine, though it operated for only a very short time. After this, a series of small-scale operations were launched, often surviving for no more than a few years before water seepage problems caused the mines to close.

The Vodon Mine was the first large-scale operation, and it was open for two years, from 1885 until 1887. After this, the Manitoba Coal Company formed early in 1889 with the intention of selling Turtle Mountain coal beyond local markets. In 1890 the company located and mined several seams with some success, and Turtle Mountain coal found its way into local and even some Winnipeg stoves. The company's success fizzled out once plans to build a railway to carry the coal between the mine and Deloraine were scrapped.

Duncan McArthur opened a mine on his property in March of 1893. Other than one more small-scale attempt in 1904, coal mining as an industry ceased until 1931. At this time, when the drought conditions of the depression shattered crops and other industries failed, a need for jobs and a cheap fuel source was created.

In the fall of 1931 the Deloraine Coal Mines Ltd. attempted to resuscitate the abandoned McArthur Mine with limited success, due primarily to water problems. The project closed down in 1933 bringing an end to the company’s existence.

Without a doubt, the two most lucrative Turtle Mountain mining operations were on the Henderson and Salter properties. These two mines, metres from each other and separated by a single barbed-wire fence, produced 95% of Manitoba's coal over a span of about eight years.

Though all attempts at Turtle Mountain mining were less successful than originally dreamed, the coal mines did serve to bring a sizable amount of money into the district, most of which circulated locally and contributed to the economy during times of financial trouble. There are still millions of tons of coal sitting under Turtle Mountain soil, but at present it is not economically (or environmentally) viable to pursue its extraction.

Henderson Mine
(1932 – 1943) The Henderson Coal Mine operated for a solid 11 years and provided coal to locals of the area.
Lennox Mine
(1883) The Lennox Coal Mine was the first commercial coal mine in Manitoba. It's location is not exact.
Lennox Post Office
(1886 - ?) Lennox Post Office
Manitoba Coal Co. Operations
(1889 – 1891) The Manitoba Coal Co. operations were less successful than originally dreamed.
Salter Mine
(1933 – 1938) The Salter mine operated as a rival to the neighbouring Henderson mine.
Vodon Mine
(1885 – 1887) The Vodon Coal Mine was the first large-scale mining attempt.