The Most Successful of the Turtle Mountain Coal Mines

Without a doubt, the two most lucrative Turtle Mountain coal mining ventures were on the Henderson and Salter properties. Southwest of Deloraine, they were located metres away from each other: the Salter Mine on the northeast corner of a section and the Henderson Mine operating from the northwest corner of the same section. These two mines, separated by a single barbed-wire fence, produced 95% of Manitoba's coal over a span of about eight years. 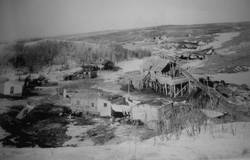 The Salter Mine operated during the depression. It, along with the neighbouring Henderson mine, is responsible for 95% of Manitoba's coal production. CREDIT: Manitoba Archives

The Henderson coal seam was discovered by John Nestibo and his brother while they were in the process of digging a well. Nestibo struck a deal with Henderson—the owner of the property—and mining began under the general management of John Nestibo. In the fall of 1932, Henderson demanded more royalties. Instead of acceding to his demands, Nestibo jumped the fence and went to work as general manager for the Salter Mine next door.

The Salter Mine operated during the winter from 1933 until 1938. Conditions in these underground mines were anything but luxurious. There was no money available for safety precautions so everyone more or less looked after themselves. Smothering heat and humidity was produced by a steam engine that pumped seeping water out of the mine. Miners became soaked in sweat within minutes and on meal breaks they ran as fast as possible between the mine and the dining hall in an attempt to keep their pants from freezing. Despite the cramped and dangerous tunnels, no one was ever killed in them, though bumps and bruises were common enough.

A crew of women, Nestibo’s family members plus a few hired hands, provided the support staff for the miners. Mrs. Nestibo was the general manager of the kitchen as well as the laundry, sewing and “medical” departments. It took 150 to 200 loaves of locally-bought bread and half a beef weekly to feed all 40 miners. The entire Nestibo family was involved in the mine's operation. The Nestibo’s daughter, Evelyn, was recorded saying “We actually missed it when we quit the mining business.” The Salter mine closed down in 1938 due to water seepage complications.

After John Nestibo left the Henderson mine, George Cain became general manager. The mine operated similar to the Salter mine. For evening entertainment, especially during snow-ins, the miners would pitch in money from their wages to go towards a barrel of “refreshments,” and Mrs. Cain made sandwiches for socials in the dining hall. Those who imbibed too heavily sought aid from Mrs. Nestibo next door who whipped up a homemade but highly effective remedy. Unlike the Salter Mine, George Cain’s crew worked all year round, though with only one shift daily in the winter as opposed to two during the summer months.

The Henderson and Salter mines operated until the Great Depression began to ease and World War Two broke out. Farmers returned to their fields; adventurers sought the war overseas. In 1939 Cain sold the Henderson mine to a company from Bienfait, Saskatchewan, and it operated until 1943 under the name Goodlands Mine Company. Flooding and war labour shortages contributed to the demise of the mine.

All attempts at mining near Turtle Mountain were less successful than the original operators dreamed. Yet, the Salter and Henderson mines consistently produced coal for a significant number of years. Especially during a time when jobs and cheap fuel were scarce, desperation was relieved by these two mines which gave a substantial boost to Deloraine's economy.