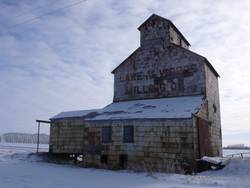 The elevator in Elva still stands after being built over a century ago.

The oldest remaining elevator in Canada!

Grain elevators are an age-old symbol of western Canada – they stand like sentinels over ghost towns, communities and endless acres of farmland. The grain elevator was, and still is, the link between the farmer and the market, providing storage and serving as a shipping centre for bulk grain.

However, the old-style wooden elevator does not have a secure future. Today super silos have taken over the job previously done by small, in-town elevators. Many of the old, and by comparison smaller, elevators are being torn down – in Manitoba the rate is roughly one elevator every two months.

In this light, it is ever so much more impressive that one specific elevator has managed to survive to the present day. After the destruction of the Fleming elevator in Saskatchewan in 2010, the site of the oldest elevator in Canada became the small hamlet community of Elva, Manitoba. Elva is located halfway between Melita and Pierson on the Canadian Pacific Railway line.

The elevator’s construction dates sometime between 1892 and 1899 and displays a characteristic squat style which was used prior to 1910. This design sets it apart from other prairie elevators. It was built by the Lake of the Woods Milling Company of Winnipeg, which was incorporated in 1887 with the intention of building and operating a network of grain elevators throughout western Canada. Before the turn of the century, the Lake of the Woods Milling Co was one of Manitoba’s top companies in the grain industry. The Lake of the Woods Elevator shared the business from the community of Elva with three other elevators, all built near the turn of the century and operated by different companies. 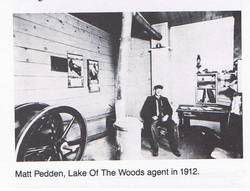 Matt Pedden served as the Lake of the Woods agent at the Elva Elevator in 1912.

Since the 1890s there have been a few improvements to the building. A new foundation was built for the elevator sometime around 1950 and a new scale installed. Some suspect that the entire building was rebuilt at this time; however its historic squat design makes this unlikely. Soon after, it became managed by the Ogilvie Milling Co when that company merged with Lake of the Woods Co in 1954. In 1959 it was purchased by Manitoba Pool Elevators, which closed the elevator in the late 1960s. The building was then sold to a private farmer. Despite its changing of hands several times, the title on the side of the building still reflects its original ownership by Lake of the Woods.

Today the old Lake of the Woods elevator shares its seat beside the railway with a United Grain Growers Elevator which is also inactive. The elevators, though now dormant, sit alongside an active Canadian Pacific Railway line. Elva continues to be a major grain-handling centre: in 2000 a large Agricore elevator was built near Elva with 14,500 metric tonnes of storage space. This facility was purchased by Cargill in 2007. In 2012 Cargill announced its intention of expanding the facility in order to accommodate storage capacity for 24,500 tonnes.

Currently there is an effort to preserve the Elva elevator, though exactly what its future will look like is unclear.