(1920s-1960s) A pair of Métis brothers lived out their lives on this quarter section.

In 1908 the Métis began settling permanently on Turtle Mountain, an area they had previously only used as a temporary and seasonal camping place from which they pursued the bison. A concentration of Métis families appeared around Metigoshe Lake, though the surrounding Turtle Mountain bush was also widely settled. (See the Beginning of the Metigoshe Community ).

One homestead on the northern slopes of Turtle Mountain, about eight miles (almost 11 kms) southwest of Boissevain, is where two Métis brothers settled sometime in the early 1920s. Evidence of buildings, graves and oral history suggest that the property may have been the site of some sort of Métis community, but records are sparse. 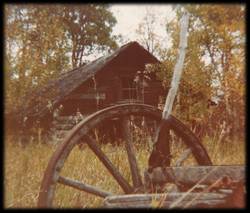 The Ducharme brothers built three buildings on their property; a house, barn and this building, their workshop. CREDIT: Frank and Doreen Smith

Frank and Bill Ducharme, past inhabitants of the property, moved to Turtle Mountain during their teens and lived at several other places before settling on this homestead. There they built a house, workshop and barn which housed two horses. Bill couldn't speak English, only a dialect known as Michif which draws its influence from First Nations languages and French. Despite this, it was Bill who walked the three quarters of a mile to McKinney Road every Saturday. There, he would hitch a ride into town (Boissevain) with the first person who came along in order to go grocery shopping. After he was done, he waited around the Queen Hotel and got a ride home with a neighbour. The Ducharme brothers seemed to be able to exist on canned goods and tobacco. A garbage pile still exists on the site which contains 50 years' worth of rusted cans.

Frank occasionally did some work for farmers in the area. For several years he worked for Bill Eaket, who later became reeve of Morton Municipality. It is thought that because of this connection, Mr. Eaket granted Frank and Bill some welfare which took care of their groceries and absorbed the taxes on their land. Though the Ducharme brothers did do a bit of work during harvest time, they didn't need money for much of anything and didn't often leave their homestead.

Owen Alvis grew up living about a mile from the Ducharme brothers and remembers Frank and Bill. Their homestead did not have a phone, so if there was an event such as a death in the Ducharme family, relatives would phone the Alvis household, and Owen's mother would insist that Owen tromp – without the benefit of snowshoes – through about a mile of bush in mid-winter to let Frank and Bill know.

When Frank had a stroke in 1968, Bill came to the Alvises for help, though he had difficulty communicating the reason for his distress. Eventually, he managed to enlist their aid. Soon afterwards, Frank and Bill moved off their homestead to the Horton area for a few years before moving into Boissevain.

A Link to History

Genealogical studies have expressed some hypotheses tying the Ducharme family to several important people from the area's history, though such ties are foggy and difficult to prove. A Métis fellow by the name of Joseph Deschamps served as a scout for the well-known explorer Alexander Henry Jr. around 1806. After that, Deschamps got involved in the Battle of Seven Oaks in June of 1816. While the dust was settling over this conflict, Deschamps changed his name to Ducharme to avoid prosecution due to his involvement in the skirmish.

Frank survived his brother Bill by eight years, dying in 1983 at 79 years of age. Their property is now owned and protected by the Rural Municipality of Morton as a heritage site. Visitors are welcome but are asked to take care not to disturb the site or the environment.

(1920 – 1933) Rum-runners used the Dunseith Trail to smuggle illegal alcohol into North Dakota in the days of alcohol prohibition.

Note: The Ducharme Property is open to visits from the public, but there is no distinct trail.