Newcomb's Hollow is a pretty spot where a small interpretive centre for the Old Deloraine Land Titles Office has been built with a replica of the old Office.

The Need for a Land Titles Office

The first Land Titles Office in the Turtle Mountain area was a solitary tent that was set up in August of 1880 by land titles officer Mr. Cobb. By the fall of that year, and particularly as more and more pioneer-settlers began filtering further west, it became necessary to appoint someone to establish and occupy a permanent Land Titles Office at Turtle Mountain to allot and approve land claims in the area. The Canadian government decided to appoint its “most experienced officer” – which turned out to be Mr. George F. Newcomb, a timber inspector and land office clerk from Winnipeg. He was promised a salary of $1,200 a year. When his office was built, it became the administrative centre for over 2,700 square miles (about 6,900 square kms) of territory: a full 75 townships. 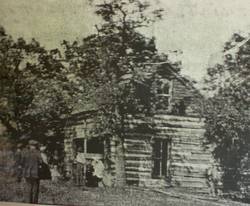 George Newcomb built a two story building out of which he conducted business and lived with his family. CREDIT: Deloraine History Book Committee "Deloraine Scans a Century 1880-1980"

Newcomb moved out to a section of land on the northern slope of Turtle Mountain in 1880. He brought with him his second wife and a daughter from his first marriage. When he arrived at the site of his land titles office, he found a number of settlers already impatiently waiting. He was quick to build the two-storey building that became his office and home, situated right beside the Boundary Commission Trail and on the bank of Turtlehead Creek (formerly known as Whitewater Creek). All newcomers to the area were required to make their way to Newcomb to fill out applications for land and pay the accompanying fees. Some days, as many as 70 people waited outside the office for their turn to do business with Newcomb. It was not uncommon for a man to arrive early in the morning one day and have to wait until late in the evening of the following day before he was seen to. Such was the need for a land titles office in the area.

And the Settlers Flocked . . .

In the first year of its operation, the office granted 328 homesteads and 301 pre-emptions (promises to develop). The next year, 1882, there was a boom in settlement, and 1,641 homesteads and 1,404 pre-emptions were granted. Within six months of its opening, businesses and establishments had begun to crop up close to the land titles office, and the town of Old Deloraine was established a few miles away. The land titles office itself was used for church services and hosted the very first agricultural exposition in the district in December of 1881.

In 1886, with the construction of the railroad, the land titles office moved to the New Deloraine townsite, several miles to the northwest. Newcomb's Hollow, once the busiest site in southwestern Man-itoba, fell into disuse. The office continued to operate out of New Deloraine until 1893. By this time, the office had fulfilled its mission and there was very little land in the area that remained available for distribution. During its thirteen years of operation, 1,200,000 acres of prairie land was settled (over 200 townships).

The original site of the Land Titles Office was submerged in 1962 by the Deloraine reservoir. The picturesque ravine in which Newcomb's Hollow is nestled remains as a reminder of the man George Newcomb and the important role that his office played in the settlement of Manitoba's southwest.

Boiler Trail
(1880 – 1885) The Boiler Trail provided a detour around the muddiest section of the Boundary Commission Trail.
Boundary Commission Trail
(Pre 1600 - 1885) The Boundary Commission Trail was the first “highway” to the west, carrying First Nations to and fro, Métis on buffalo hunts and finally Europeans looking for rich farmland.
Boundary Trail Visible - Sourisford
(1873) The Boundary Commissioner Trail is still visible in this location. It is used by a local farmer to run cattle down to the Souris River.
CNR-Wakopa Subdivision to Deloraine
The 28 miles of the Canadian National Railway from Adelpha to Deloraine was completed in 1914.
First Settler Shanty in Southwest Manitoba
(1879) Two brothers, Oliver and Herb Smith, were the first permanent homesteaders in the south-west, before the section, township and range system of surveying the land was implemented.
Hole-in-One Cafe
Located in the golf course clubhouse, 7kms southeast of Deloraine. PHONE: 204-747-2411
Mandan Trail
The Mandan Trail was a primary artery of travel and trade between the Assiniboine River Forts and the Missouri River where the Mandan First Nations lived.
Old Deloraine
(1882 – 1886) Old Deloraine was established just north of the Land Titles Office, but moved when the railway came through the area.
Old Deloraine Cemetery
(1881) The area's very first permanent pioneers were laid to rest in this scenic cemetery.
Old Deloraine Land Titles Office
(1880 – 1886) Homesteaders in southwestern Manitoba had to first make their way to the Old Deloraine Land Titles Office, managed by George Newcomb, to register land claims.