(1881) The area's very first permanent pioneers were laid to rest in this scenic cemetery.

A Town is Born

After the Land Titles Office was established at the edge of Turtle Mountain (by George F. Newcomb), the area began bustling with activity. In March of 1882, John Cavers and A.P. Stuart opened a general store and post office about a mile and a half (two kms) north of the land titles office. Cavers named it Deloraine after the town he came from in Scotland. Later, Stuart and his brother, Frederick Thomas Stuart, built a bank. The bank vault was constructed in 1884 by George Rickard, a pioneer and stonemason in the area, and was used to store valuables such as homestead deeds. Native granite fieldstone was used to construct the vault, reinforced by mortar and iron rods. It is one of the earliest examples of fieldstone construction in Manitoba. 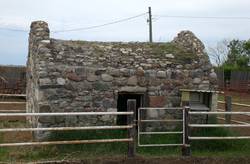 The fieldstone bank vault is all that remains of Old Deloraine. CREDIT: Teyana Neufeld, TM-SPHA

It was soon safe to declare that the settlement of Deloraine was “better supplied with stores than any part of the North-west.” In 1883, the population of the village was a total of 50 people, 32 of whom were engaged in businesses or professions. There were a variety of commercial establishments which cropped up in the prairie townsite, including an agricultural implement store, blacksmith, mill, hotel, a physician, a barrister, and three members of the clergy. A schoolhouse opened in 1884. The first teacher to take up duties there was Miss Addie K. Anne of Toronto. The school closed once cold weather set in but opened again in April.

The Old Deloraine Cemetery is located about a mile and a half (two kms) south of the original village, looking over the prairie from its elevated position on the slopes of Turtle Mountain. The first death and funeral in the area occurred in May of 1881. At the time there was no doctor or minister present, so a local man read some scripture at the cemetery as the body was interred. This cemetery holds the graves of the first pioneers of the region, many of whom have descendants still living in the area.

After the Railway Arrived

Old Deloraine was established in 1882 on a site where the Canadian Pacific Railway (CPR) was predicted to pass through. But in 1886, the CPR constructors favoured the flat prairie several miles to the north and the town of Deloraine was completely bypassed. That winter, in 1886-1887, the settlement picked up and moved to a location five miles to the northwest, the site of present-day Deloraine, in order to start over alongside the railway. Placed on skids, the buildings in the village were hauled over the snow that winter to the new townsite. All that remains of the old settlement today is the cemetery and the sturdily built fieldstone bank vault.

Boiler Trail
(1880 – 1885) The Boiler Trail provided a detour around the muddiest section of the Boundary Commission Trail.
Boundary Commission Trail
(Pre 1600 - 1885) The Boundary Commission Trail was the first “highway” to the west, carrying First Nations to and fro, Métis on buffalo hunts and finally Europeans looking for rich farmland.
Boundary Trail Visible - Sourisford
(1873) The Boundary Commissioner Trail is still visible in this location. It is used by a local farmer to run cattle down to the Souris River.
CNR-Wakopa Subdivision to Deloraine
The 28 miles of the Canadian National Railway from Adelpha to Deloraine was completed in 1914.
First Settler Shanty in Southwest Manitoba
(1879) Two brothers, Oliver and Herb Smith, were the first permanent homesteaders in the south-west, before the section, township and range system of surveying the land was implemented.
Hole-in-One Cafe
Located in the golf course clubhouse, 7kms southeast of Deloraine. PHONE: 204-747-2411
Mandan Trail
The Mandan Trail was a primary artery of travel and trade between the Assiniboine River Forts and the Missouri River where the Mandan First Nations lived.
Newcomb's Hollow
Newcomb's Hollow is a pretty spot where a small interpretive centre for the Old Deloraine Land Titles Office has been built with a replica of the old Office.
Old Deloraine
(1882 – 1886) Old Deloraine was established just north of the Land Titles Office, but moved when the railway came through the area.
Old Deloraine Land Titles Office
(1880 – 1886) Homesteaders in southwestern Manitoba had to first make their way to the Old Deloraine Land Titles Office, managed by George Newcomb, to register land claims.