The Beginning of a Grain Centre

After the Canadian Pacific Railroad (CPR) came through southwest Manitoba in 1886, George Morton, entrepreneur and businessman in the Whitewater area, was quick to realise the potential of setting up a townsite close to the railroad and on the shores of a water source such as Whitewater Lake. While other small towns, such as Waubeesh one and a half miles to the southwest, were dying because they were bypassed by the CPR, Whitewater was settled after the railroad came through, thus given a real chance at success.

The boxcar railroad station that had been established to service Waubeesh became the beginning of Whitewater village. Morton built an elevator in 1888 along with a large general store and boarding house, using lumber cut by the Lake Max Sawmill. The elevator was the first of five that came to spring up in the town, transforming Whitewater into a very important grain handling centre. In addition to servicing farmers many miles to the east, west and south, grain grown to the north of Whitewater Lake was carted across the winter ice to Whitewater village. On a fine day dozens of teams could be seen making their way across the ice pulling sleighs full of grain. 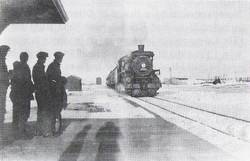 A brickyard started up in the late 1880s about a mile northeast of Whitewater which employed between 30 and 40 men. The bricks made from Whitewater Lake clay were of very high quality, and many buildings in the nearby town, including the Petersburg School, were built out of bricks from this brickyard.

Mr. and Mrs. Peters came to the area in 1888 to manage Morton's store which carried almost everything under the sun. In addition to being a storekeeper and elevator agent, Peters was a liveryman and magistrate. He was also the community's doctor, dentist and veterinarian. In 1889 Morton opened a post office in the village which operated until 1967.

By the late 1890s – early 1900s, the establishments in the village included a butcher shop, harness-making shop, livery, carpenter, and draftsman. The town also had an open-air skating rink complete with a warm-up shack. Rail service was provided regularly by the CPR, with daily passenger and mail traffic.

In 1914 the general store burnt down in a fire that originated in the blacksmith shop and destroyed both buildings. A smaller store was built to replace the old one, and in the 1920s a second store was needed as the village increased in population due to a stream of incoming settlers including many Mennonites from eastern Europe.

Until 1894, the children of Whitewater attended Mountainside School, which was four and a half miles (7.5 kms) to the south. In '94 a schoolroom was set up above the general store in Whitewater, and Miss Emma Rombough served as the first teacher. Petersburg School was built the following spring at the south end of the community.

The town of Whitewater declined for a variety of reasons. First, the railroad built a line to the north of Whitewater Lake and farmers no longer had to depend on the elevators in Whitewater. Then, the CPR discontinued passenger and mail service as transportation was taken over by vehicles instead. Farms were also becoming larger, and there were fewer families per square mile. The final blow for Whitewater, as it was for nearly every small prairie town of that time, was the consolidation of rural schools. After 1966, children took the bus to either Deloraine or Boissevain School, and families began to look to these larger communities for their daily needs and activities.

Boiler Trail
(1880 – 1885) The Boiler Trail provided a detour around the muddiest section of the Boundary Commission Trail.

CPR-Pembina Branch to Deloraine
The CPR reached Deloraine in 1886.
George Morton's Cheese Project
(1882 – 1883) George Morton launched a cheese-making project west of Whitewater Lake. He may have been successful if he hadn't overlooked a couple key factors . . .
North West Co. Post
(1802-1805) The North West Fur Trading Company set up a post only a few miles from their rivals, the HBC.
Whitewater Village
(1886 – 1960s) Whitewater village flourished on the shore of Whitewater Lake for over 75 years.