(1896 –Present) The Prairie Skills building has come through many incarnations since it was built to serve as a Catholic church.

The many careers of a small-town stone church

Local legend says that it all began with a challenge from Deloraine’s Presbyterian pastor to his congregation: “Week by week bring in stones from your field and when we have enough, we will begin to build a church.” Whether the story is true or not, the decision was made in 1894 to build a church in the Gothic Revival style out of fieldstone and local brick.

It took a few years of planning and gathering materials before the church was finished. The building probably wasn’t completed until well into 1897, but nonetheless a full-day celebration was held in January of 1897 to dedicate the building. Visiting clergymen from Boissevain and Winnipeg assisted the local pastor in speaking to the many who gathered on that day.

The building only actually served as a church for 20 years. The Presbyterians of Deloraine enjoyed it as their home until 1917 when the Methodists in town built a church just one block east. When the two congregations joined together and formed the Union Church, the old fieldstone building was left empty. 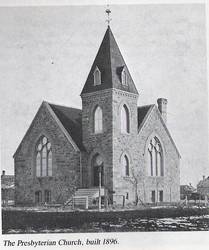 The Prairie Skills building in the early 1900s.

A Multitude of Uses

Since that time, the building has served a multitude of purposes. In the early 1920s it provided a space for a meeting/concert hall and a recreational facility for the community. In 1935 the high school burned down and classes moved into the fieldstone building, which came to be known as Falconer Collegiate, named in honour of a long-serving school board member. After holding classes for almost 20 years, the building was left empty again when the school district built a new educational facility. In 1959 the building was bought jointly by the Town of Deloraine and the RM of Winchester. The former church was used as the administrative offices for these two groups, and also became a home for the town jail, Manitoba Crop Insurance office (in 1974), and the Turtle Mountain Conservation District (in 1978). The Town Offices moved into its own building in 1980, making room for the office of the Brenda-Winchester Weed District and Ag Representatives.

In 1991 things changed dramatically when the groups using the building all found housing elsewhere in Deloraine. Winchester then sold its half of the building ownership to the Town of Deloraine. Without having anything to do with the building, town council was ready to demolish the former church and build instead a pair of residential lots in this prime central Deloraine location.

In the fall of 1991 a new organisation hit the scene: Prairie Skills Inc. (PSI), spearheaded by Ben Kroeker, the Deloraine Times and Star newspaper editor. It was this group’s goal to do something with the building to save it from demolition. In 1992 the town of Deloraine leased the building to PSI for ten years. Also that fall, the building was designated a Municipal Heritage Site: the only one in Deloraine. As PSI moved into the building, many renovations were made. It is now PSI’s goal to make a full restoration of the building to its original grandeur. Prairie Skills Inc. sponsors and conducts various programs which target rural Manitoban residents and focus on Heritage, Culture and Education. Prairie Skills has three main objectives: to promote and interpret local historical records, to promote arts and culture, and to offer courses and training programs.

Kroeker, Ben. A Building with a Past . . .and a Future. Brochure.

CNR-Wakopa Subdivision to Deloraine
The 28 miles of the Canadian National Railway from Adelpha to Deloraine was completed in 1914.