(1892-1963) A collection of Belgian settlers built this church on Turtle Mountain.

My relationship with the St Paul’s Cemetery dates back to the very first local history tour hosted by the Turtle Mountain-Souris Plains Heritage Association; this was in the summer of 2008. While we were driving across Turtle Mountain we passed a roadside sign that I managed to read: St Paul’s Pioneer Catholic Church. We had no time to stop, but I kept this site in the back of my mind and kept my ears and eyes peeled for any mention of this church in local histories.

Despite later searching, I could find no written record of the church. It wasn’t until several summers later that my curiosity was finally satisfied. I was driving around the Mountain with one of the TM-SPHA’s board members, who suggested we stop at this cemetery he had heard about. And so we did.

Our visit to the charming site of the cemetery was made all the richer by a visit from Maurice Lesy who has spent his life living next door to the site. He invited us into his home where we shared a long chat over coffee. He and his wife Joan regaled us with stories about the church and cemetery, and shared with me photos and a school project their son did on the history of the church. From their kitchen table, comes this story . . . 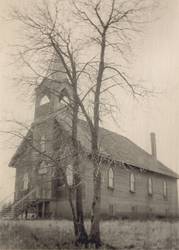 To Build a Church

In the early 1900s the slopes of Turtle Mountain south of Deloraine were settled mostly by Belgian settlers. Belgium at this time was suffering from overpopulation and unemployment, making the Canadian prairies an enticing option to those willing to emigrate.

In the spring of 1917 the Belgian community living on the slopes of Turtle Mountain and their priest, Father P. E. Halde decided to build themselves a church wherein they could pursue their worship of the Catholic faith. The spot they chose was high up on the mountain where it could be seen for miles and miles. The land was donated by August Lesy (Maurice’s grandfather, who lived on the same yard Maurice and Joan live on now).

Friends and neighbours came together to help construct the church: Mr Rae from Deloraine provided some carpentry skills and nearby neighbour Aime Andries volunteered to make the cement. He made it with a homemade cement mixer that was powered by horses. The entire church was made out of wood, though in later years they put a brick veneer over the wood and metal on the corners. The lumber to build the church was bought from Jim Flynn’s lumberyard in Deloraine. Flynn also donated the lumber that was used to build the alter. Finally, in the fall of 1917, St Paul’s Catholic Church was finished.

Events in the Church

The church’s congregation came from an area that stretched from Goodlands to Mountainside to the American border. Belgian settlers made up the majority of the congregation.

The church also served as a community centre and many other events were held there aside from church services: everything from pie and box socials to picnics, dances and quilting bees. It was used as a theatre for concerts at Christmas time and at Easter. Kids who attended the nearby Flossie School would come to the church a week before Christmas to practice their concert on the stage. The neighbouring lake (named Dann’s Lake after the previous owners of the property) was used for swimming and the clearing beside the church was the site of baseball games and other social gatherings.

Over the years, nine different priests served St Paul’s Church, serving terms lasting between one and 11 years. The priests lived in Deloraine and drove the six miles up the mountain to the little church every Sunday. Mass times in the morning varied according to the time of the year. Church services were generally better attended during the summer months, peaking around 30 to 40 people.

For many years a group of Sisters from Brandon came down to the mountain for two weeks during the summer to teach the children about Catholicism. During their stay they were hosted by Alidor Andries and his family who lived half a mile away.

The Lesy family was very involved in the life of St Paul’s church. Their home was directly beside the church, a distance of only a few hundred meters. Maurice’s mother, Mrs Omer Lesy, washed the linens for the church, a duty that was later taken over by Joan Lesy, Maurice’s wife. The Lesys also lit the pot-belly fire before service every Sunday so that the room would be warm. In the earlier years, when church attendees drove horses and carts to church, the Lesys would stable the animals in their barn during the service. There is a cemetery beside the church, which was established in 1892, much earlier than the date of the church’s construction. Most of the graves are very old. The northeast corner of the cemetery is interesting in that one section is devoted entirely to the graves of infants.

Maurice remembers one funeral that was held at the St. Paul’s cemetery: a body was brought to the church in a coffin the night before it was meant to be buried. It was wintertime and the body was put in the church overnight so it wouldn’t freeze outside. It felt a little too close for comfort to Maurice who lives just a stone’s throw away: “I just hoped he wouldn’t decide to get up in the middle of the night!”

The End of St. Paul's

Towards the end of its heyday, masses were only held in the church during the summertime. The ladies of the district formed a cleaning bee to open the church up from its winter dormancy and give it a good clean from top to bottom. In addition to sprucing up the church, they decorated the alter with spring flowers. In the summer of 1961, Father H. S. Stangl phoned Joan Lesy in the spring and said: “I don’t think I’ll come to the mountain to say mass this summer.” Joan and a few other ladies from the district had just finished scrubbing the whole building down anticipating another summer of masses. The Father replied by saying if that was the case he’d come for another year. He conducted services that summer, but the next year services stopped being held in the little mountain church.

The true ending to the church building came just two years later. In 1963 the church steeple was hit by lightning and the metal corners caused the bricks to crack. The church began to sag to such an extent that the parishioners decided that it was better that the building come down and the lumber be put to good use. Valere Andries reused some of the lumber to build a granary. The floor of the church ended up being reused in one piece as the floor of Maurice Schoonbaert’s home.

No trace of the church remains today, except for the cemetery looking over the prairies from its perch on the mountain. The Rural Municipality of Winchester has since taken over maintenance of the site. In 2010 a rededication of St. Paul’s Church and Cemetery took place on the site, unveiling a new plaque with the names of those who rest at the cemetery.

Maurice Lesy was born in the farmhouse next to the churchyard in 1933. He went to school at Flossie School up to grade nine and then started helping his dad on the farm and has been there ever since. With a gesture towards the cemetery next door, he figures that he might as well stay here forever.

Photos: Church - Used with permission from the Archdiocese of Winnipeg

Flossie School
(1904-1966)
Hainsworth Mine
(1931 – 1933) The Hainsworth Mine was operated by the Deloraine Coal Company for two years.
Mandan Trail
The Mandan Trail was a primary artery of travel and trade between the Assiniboine River Forts and the Missouri River where the Mandan First Nations lived.
McArthur Mine
(1893) Mr. Duncan McArthur supplied coal from this mine to a local market for a few years. In the 1930s it was re-opened before being permanently closed.
St. Paul's Cemetery
(1892-1963) A charming cemetery on Turtle Mountain